One of the most important things to know when playing the game of soccer is how to wear shin guards because they will protect you from the possibility of getting injured. Shin guards are required to be worn in accordance with Law 4 of the IFAB Laws of the Game, “The Players’ Equipment.” (In Law 4, the term is technically one word, “shinguards.”) 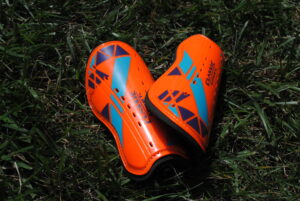 Like soccer shoes, shin guards come in many varieties and their selection is based mostly on personal preference.  Shin guards can be tall or short, skinny or wide, thick or thin, and can come with a variety of different devices to hold them in place.  The vast majority of shin guards are made from plastic and are molded in a curve to conform to the shape of the lower leg.  Also like soccer shoes, it is extremely important that shin guards be properly fitted to the player, that they are comfortable, and that they allow for full and proper movement.

The basic structure of a soccer shin guard consists of a front plate or “shield,” a backing or “cushion,” and usually an attachment or “closure” device. The front plate is the main part of the shin guard.  This piece provides the actual protection from contact.  The front plate is commonly made of hard plastic or a carbon-fiber material designed to withstand an impact.  The backing of the shin guard helps absorb contact and keeps the shield from rubbing the skin.  The backing usually consists of a foam or synthetic rubber material, laminated or glued to the front plate.  The closure device is intended to keep the shin guard firmly attached to the lower leg.  When used, it consists of a sleeve, elastic straps, or hook-and-loop ties that go around the back of the calf. It may also have a “stirrup” that goes under the foot.  The stirrup-equipped version may also include some form of ankle protection.

There are generally two types of shin guards, “slip-in” shin guards and “ankle” shin guards.  Slip-in shin guards are stand-alone units, consisting only of the front plate and cushion, without any attaching device secured to the guard.  They tend to be thinner and more lightweight.  These shin guards may be used with a compression sleeve, or simply placed inside the socks, in order to hold them in place and keep them from moving.  They may also be secured with athletic tape.  Slip-in shin guards tend to be preferred by more advanced players.  Ankle shin guards, also known as “ankle-protection” shin guards, have permanently-attached stirrups and straps to hold them in place.  These usually have soft padding on both sides of the stirrup to help protect against kicks to the ankles.  Sometimes, the ankle protection is removable.  Ankle-protection shin guards with soft ankle padding are often recommended for young players.

When acquiring shin guards, players, and parents of young players, need to consider the length (size or height) of the guard, the type and hardness of the cushion, the width, the comfort of the attachment, whether or not ankle protection is desired, and finally the  ability to move properly, the overall weight, and the “feel.”  In general, shin guards should fit from just above the upper bend of the ankle to a number of inches below the knee.  The ability to move the foot properly without any binding or obstruction is most significant.  Nothing about a shin guard should restrict the player from being able to fully flex the foot or bend the knee.  Ideally, shin guards should be tried on and tested before they are purchased, using the shoes and socks that the player will be wearing. The majority of shin guards come packaged as an identical pair. Considerations include:

Size (length or height):  Shin guard sizes are often associated with the height of the player and are usually identified as Extra Small (XS), Small (S), Medium (M), Large (L), and Extra Large (XL), correlating to 3’3” through 6’9” over that range.  These sizes are sometimes also linked to age ranges.  There is no standardization, however, among sizes between manufacturers.  One manufacturer also offers sizes Youth Small (YS), Youth Medium (YM), and Youth Large (YL).  Shin guards should not be purchased on the basis of size markings alone.  At a minimum, shin guards must be held up to the shin to ensure that they are neither too long nor too short.  Alternatively, one can measure the shin, from one inch above the ankle to one inch below the base of the knee.  This results in the maximum length of a possible shin guard.

Type and hardness of the cushion:  The padding used for shin guard cushions can range from very soft to very hard.  This may be tested by pressing on the cushion.  The effects of a hard cushion may be mitigated by the use of an undersock.  If an undersock is used, caution must be taken to ensure that the guard does not slip around on top of the sock.  In addition, there are softer, “flexible” shin guards with multiple breaks designed into the shield that are intended to conform to the shape of the leg.

Width:  As shin guards become larger – from XS to XL – they become both longer (taller) and wider.  The height of the shin and the desired coverage from the shin guard need to be taken into consideration.  In addition, there are some models of shin guards that have modified tops that provide greater coverage.  These guards come in pairs that are right-leg and left-leg specific.

Comfort of the attachment:  Elastic used for stirrups and around the ankles may seem too tight.  This is usually intentional, designed to both keep the shin guard in place and to allow for possible stretching with repeated use.  Elastic that is too tight, however, may seem uncomfortable or cause cramping due to reduced circulation.  In addition, some upper straps may not be long enough to properly go around the calf.

Ankle protection:  Stirrup-style attachments may have no padding, soft padding, or removable inserts, for both the inside and outside of the ankles.

Movement, weight, and “feel”:  When all is said and done, the player who is going to wear the shin guard must perform the test of whether or not the shin guards allow for a full range of all motion of the ankle and foot, that they do not feel too “heavy,” and that they are comfortable for play. At the end of the day if you don’t know how to wear shin guards you can consult with your coach or league.

Uniqueness to a Player’s Position:  Sometimes, usually at the higher levels, selection of the type of shin guard may be based on the player’s position.  Defenders tend to want the most protection, opting for wider, taller, and heavier guards, with ankle coverage.  Midfielders tend to seek a medium-level guard, opting for good coverage, but having a lighter weight, allowing for more freedom of movement.  Forwards tend to opt for the lightest shin guards, sometimes with ankle support or protection.

Colors:  Shin guards come in a variety of colors, but this is for aesthetics only.  Parents with multiple players may want their children to have different colors in order to distinguish them between each other.

Air holes:  Some shin guards come with air holes punched through the front plate and the cushion in order to let the guards “breathe.”

NOCSAE-Approved:  The National Operating Committee on Standards for Athletic Equipment (NOCSAE) is an organization that sets minimum standards for the performance of equipment used for sports in the United States.  Since 2008, all U. S. high school players are required to wear NOCSAE-approved shin guards.  Shin guards that have been approved by this organization will have a NOCSAE stamp that is imprinted or embossed on each guard.

Slippage:  Unfortunately, shin guards may be subject to slippage, either from side-to-side or from top-to-bottom.  This may be due to sweating or improper fit.  If so, the size needs to be reviewed or sleeves considered.  In addition, shin guard “stays” or shin guard “straps” may be an option.  If these are used on the outside of the soccer socks, according to Law 4 they must be exactly the same color as the socks themselves.  Athletic strapping tape may also be an option, but again, if used on the outer soccer socks, it must be the same color.